Monkeys having a diving competition
(tags:monkeys video water viaSwampers )
Why Uber lost their case, and why it's so important
https://threadreaderapp.com/thread/1362723609006006274.html
(tags:taxi apps work UK law )
Petition · Embra Cooncil: Pit Googly Eyes Oan The Jobby
(tags:petition funny Edinburgh hotel architecture viaSwampers )
Scientists have discovered how to break into people's dreams and leave them messages
(tags:dreams )
Mars becomes the 2nd planet that has more computers running Linux than Windows
(tags:computers Mars space Linux Windows )
How Antidepressants Work, at Last?
(tags:antidepressants psychology brain )
If you've ever wondered what it's like supporting ancient code in a big company...
(tags:software funny OhForFucksSake )
Pfizer vaccine can cope without ultra-cold storage for two weeks longer than we thought
(tags:vaccine temperature pandemic GoodNews )
There is nothing funny about the British army, at all
(tags:military UK video funny true )
Draw an iceberg and see how it will float.
(tags:iceberg water )
Being a female tech lead at Mailchimp
(tags:Jobs technology OhForFucksSake )
UK government cites US anti-LGBT hate group in free speech proposals
(tags:LGBT abortion freespeech OhForFucksSake )

Warning up-front: I am not a statistician. I'm just playing with the numbers here to scratch an itch, and I'm happy to be told that there are better ways of looking at this.

However, I was interested to see what the change over time was for the case count in Scotland.

The 7-day case count is useful because there are all sorts of artefacts that occur on a daily basis, including it taking longer for cases at the weekend to be reported. (I check here on a daily basis around 15:00, and you can see the daily figures vary in a similar pattern each week.) And comparing it with a week earlier means you get a good idea of whether there's a general upward or downward trend - whereas daily trends can be a bit deceiving. 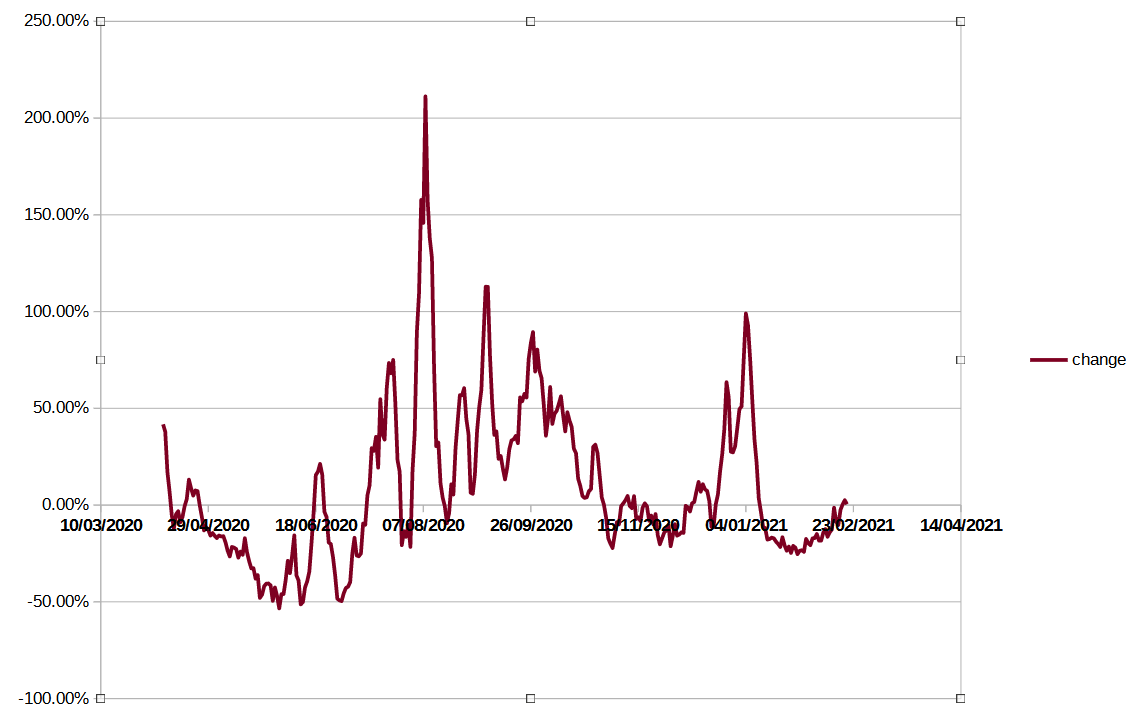 From there you can see a steep drop at the start of this year. The current worrying bit isn't a peak at all. It's that the 25% weekly drops we'd been seeing through January and early February have now gone fairly flat. Here's the 1-week changes for each day in the last week. Whatever we were doing, it's not working as well as it was...