Last weekend our families visited, and we had a lovely quiet wedding. Frankly, left to our own devices there would have been just the three of us and a couple of witnesses, but we didn't want the families feeling left out, so we invited them too, along with my oldest friend Ravi (35 years since we met!) and local friends Anindya & Clare.

We planned to get the grandparents together on the Friday afternoon for a couple of hours to meet up beforehand, and then do a meal with all of the visiting people a couple of hours later so we could hang out, but this got preempted when we went to the airport to pick up Jane's dad (Brian) and his girlfriend (Joan), and my parents and Ravi's family* arrived 15 minutes beforehand. They didn't bump into each other (Jane's dad's flight was delayed half an hour) but we did get to see everyone then before catching the tram back in to town with Brian & Joan.

We then got everyone back together at our place at 4pm, and took them for a walk around the local Lochend Park, to show them where the local swings, ducks, and dogs are, before taking them to the Safari Lounge for dinner. Everyone was delighted to see Sophia, who makes an excellent conversation piece. I bowed out a bit early, as I was having a nasty attack of IBS, my first in about three years. It had woken me up at 2am, 4am, and 6am the previous night, and I was feeling an unpleasant mixture of nausea, bloating, and exhaustion. I headed off to bed with a migraine at about 7pm, and was delighted to feel much better the following morning.

The following day (Saturday) was much nicer. Jane and I got dressed up smart and headed off to the registry at the council chambers on the Royal Mile. There are some good photos of what that looks like here. 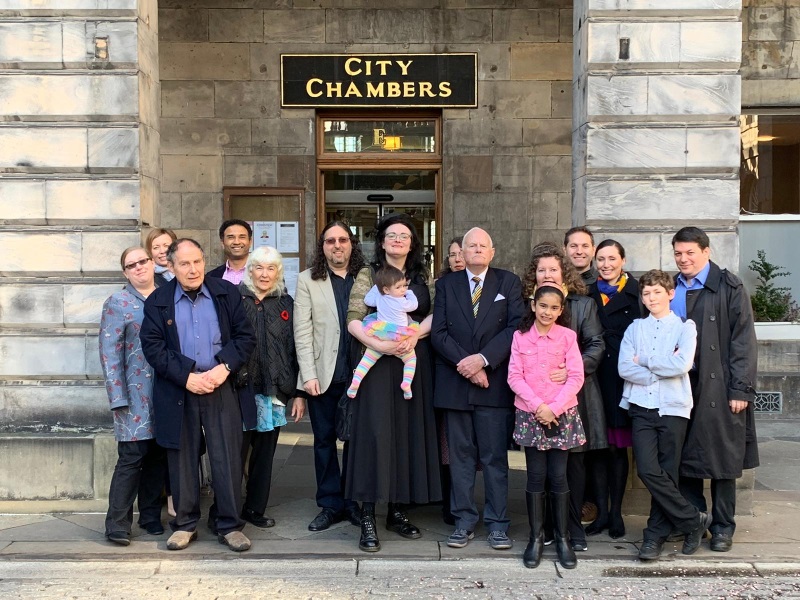 Both photos via Anindya (Brian was a professional photographer, and my dad is a keen one, but all of their photos are on their cameras, and I'm looking forward to getting copies!)

It was a lovely ceremony, and the celebrant was great. She'd had her own wedding ruined by a rubbish registrar, and had vowed to always make everyone's wedding into as nice an experience as possible. Which she managed with humour and loving words. Meredith read Jane's choice of "A Marriage" by Michael Blumenthal for us, and I read this, which I wrote myself:

Things do not always go right the first time.

Or the second. Or the third.

The world changes. People change. Things happen which nobody expects.

The important thing is how you deal with it. Do you sit down in the
wreckage, your life over forever, because if it didn't work _this_ time
then it will never work? Or do you roll up your sleeves, work out a
plan, and find a way to be happy anyway?

You learn from what didn't work, and use that to find something that
_will_ work.

You look for someone who also does this.

Someone resilient. Someone who wants the same things as you. Someone who
is willing to work at that. Someone who is willing to try and try again,
to find a way through to what will make them happy. Someone who will
stand up for themselves and _fight_ for their happiness. and who's idea
of happiness is close enough to yours that together you can make a happy
life together.

Someone who will be there, through everything. Who will look after you,
and be looked after by you, and will work with you to look after your
mutual family.

Someone who will be your family.

And then we went for a meal at Cafe Rouge, which everyone seemed to enjoy.

Sunday we had a Mother's Day meal (we had three mothers, one of whom was also a grandmother, and one person who will clearly be a mother in a month or two), and then went back to Hugh's for more sitting about and talking about babies. We lost most of the families back off homewards, and Sophia destroyed the world.

Monday we saw Brian and Joan briefly before they got on a tram to the airport themselves, and we got on a train and headed to Penrith for the honeymoon. We weren't going to go abroad for this (a bit risky when we were going to be getting married the day after Brexit was due), and Center Parcs, with its baby friendliness, and miles of forest with handy shops, had seemed like a reasonable compromise.

Jane had organised bicycles in advance, including a trailer for Sophia.

Sophia has now been swimming twice, and enjoyed herself a great deal. We have tried a variety of indoor and outdoor pools, which are particularly fun when it's been snowing and the air is really really cold.

In that photo she's been awake about 15 minutes, and was not really in the mood to be stuffed into her swim nappy and a flotation swimsuit. She did enjoy herself once we got into the pool though. Which was a massive relief, as the last time she was in a pool was at three months and she basically screamed from beginning to end. This time round there was a lot of splashing and giggling.

And this morning we woke up to this view (which has me narrating, if you turn the sound on):

Overall it is a nice relaxing experience. My stomach is much better, we are both sleeping much better, and there is plenty of quiet enjoyment to be had together. With occasional giggly splashing. Feel like an excellent start.

*Ravi and I met on the first day I moved to the new school after my parents moved house when I was 11. He was my best friend all the way through high school, and my parents got to know him very well. He's now a doctor, and lives not far from them in Devon, and so sees them far more than I do - there's a photo of his daughter in my parents' front hall, and I get to see them every Christmas as they join us for lunch one of the days we're down. They came up, of course, on the same flight.