Yesterday was not a good day for Theresa May.

She has form for shouting at the EU, trying to work around them, and complaining when she can't bypass carefully laid out legal agreements by blustering. It's working about as well now as it did then.

My favourite response being from this ex-negotiator for the UK at Europe, talking about the negotiation process so far:

It has been mishandled at every possible turn.

No attempt to build consensus at home, work cross-party or cross-UK nations, unwillingness to take account of or even understand EU27 legal and political realities, gaslighting of the population, constant attempts to blame others, obvious untruths about consequences, unwillingness to listen to advice or expertise, attempts to bypass Parliament, insulting negotiating partners (both their intelligence and outright), denial of the need for trade-offs, arbitrary red lines based on nothing, ruling out reasonable options definitively before negotiations, negotiating at home rather than in negotiations, the list goes on.

That’s even forgetting invoking Art50 with no plan then taking over a year to come up with on. Every single one of them was by May and UKGov’s own choice. It did not have to be like this.

I am not sure who is currently advising her about the EU negotiations, but whatever advice she is getting is either terrible, or she's ignoring it. The deputy political editor for The Times says that she was warned it would be disastrous, but ignored the advice as too gloomy.

And that seems standard for how the UK has been behaving. "Just ignore the advice about how awful it will be, chin up, we'll be victorious in the end." All of which makes me think that we could do with teaching schoolkids less about Word War 2 and more about The Suez Crisis.

And all of which explains why my Twitter feed this morning has an advert on it, paid for by the British government, trying to sell me on how the Chequers agreement will be just great: 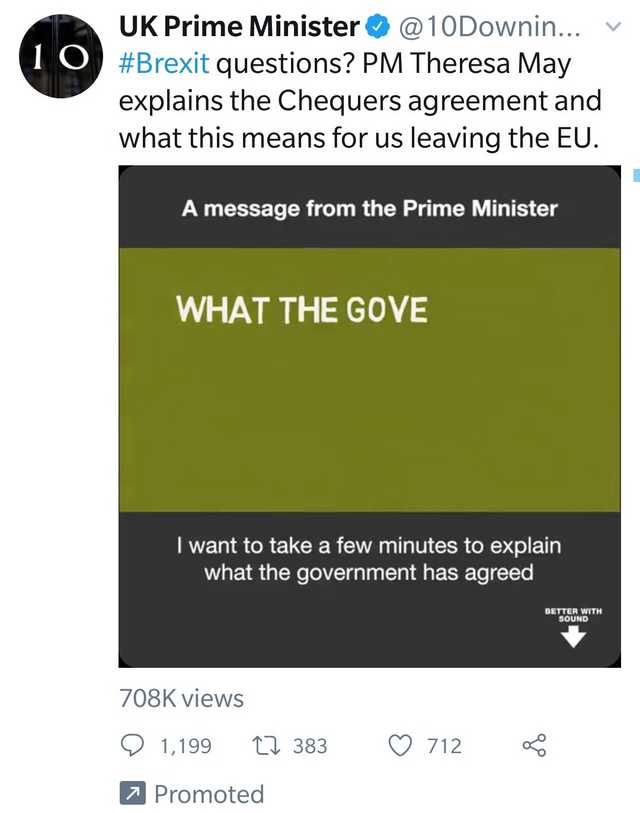 So, Chequers is resolutely dead, and we're heading for No Deal, right as Theresa May is going into a Conservative Party Conference which looks to be even worse than last year's mess. Things have become so bad inside the Conservative Party that a chunk of them have set up an alternative party conference down the road.

Any bets on when the whole house of cards collapses?