I last had one when Theo was the resident cat, and now that Jim (who arrived with Jane) is an outside cat, we decided that it would be very useful to have one again.

The previous one was installed by people who apparently didn't know anything about that kind of thing, with the result that it took them two attempts to get it right, and it developed a crack after six months.

The new one is reinforced glass, and the people who fitted it do it often enough that he recognised the model of cat flap we were havin installed.

It costs £180 to get a reinforced double glazing window with a circle cut in it installed with the cat flap put into it. It also cost about £50 for the Cat Flap and the mounting adapter.

What's particularly cool about the cat flap is that it doesn't unlock unless it detects Jim's chip. So he can come and go as he pleases, without any late night visitations from the other moggies we intermittently see in the back garden.

This is him holding it open with his head so he can sniff the breeze: 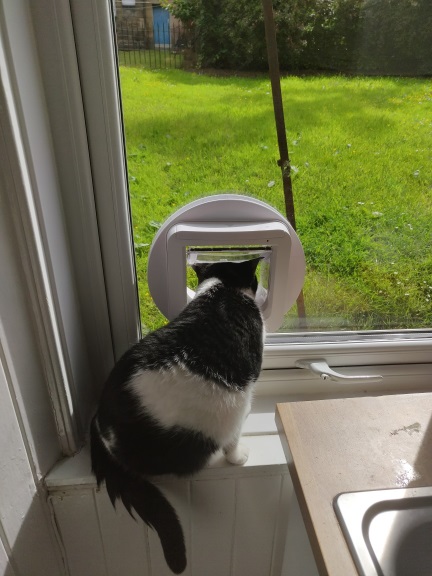 It took thirty seconds to train it to recognise him, about half an hour to persuade him to leave through it, and about 36 hours to persuade him to come back in through it. (We didn't leave him outside in between, we just kept an eye out and let him un until we got him to understand how to open it, having never used a cat flap before)

It's a little awkward and ungainly - it's got to be a few cm away from the edges of the window, so he needs to clamber up and then pull himself out with his front paws. But he manages this perfectly well, and has only fallen off the windowledge the once. And it's totally worthwhile for his comfort when we're out, or at night (when he prefers to be out, as far as I can tell).