This is Jim, sitting in the bag Loki's clothes came in from Mothercare, wearing his Locator. 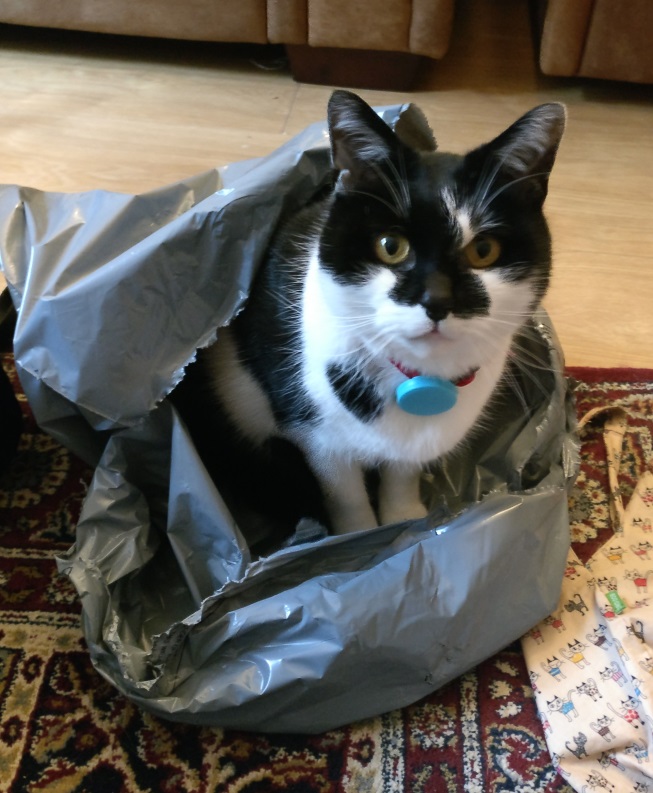 Jim was an indoor cat until he moved here with Jane. He'd lived indoors the whole time, and understandably Jane was worried that the moment we let him out he'd be off into the distance as fast as his feet would carry him. (Or, more accurately, would take fright at another cat/dog/human and then get lost.)

So along with the vaccinations, and taking him out on the lead a few times to get him used to the lack of ceiling, we went looking for tracking devices so that we could find him should he be wandering the streets begging for Dreamies.

There are multiple kinds of location devices for cats.

You get ones which use GPS and then get downloaded to your computer when the cat returns. Which is fascinating if you want to know where they hang out, but no use if they don't come back.

You get ones with use GPS and then upload the data while your cat is out and about, but then you're having to pay for the SIM card, and I'd rather not be paying for a phone contract for the cat.

Also, both of these are pretty weighty. The Pod 3 is 31 grams and 52mmx25mm. That's quite a large thing to attach to a cat's neck.

And let's face it, I don't _really_ care about seeing maps of the cat, they're just nice to have.

Enter the TabCat. It's basically a Loc8tor, designed to track small objects, but with a waterproof cover designed to be attached to a cat collar. It's only 32mm across, and weighs 6 grams. And although Jim didn't like wearing a collar at first, after a couple of days he doesn't seem to notice it any more.

It doesn't use GPS. In fact it doesn't tell me Jim's location at all. But what it does do is tell me whether I'm pointing the location handset in his direction, and whether I'm getting closer or not. So I can wander into the garden, wave it left and right until it makes a higher pitched noise/goes green, and then walk in that direction until I find whichever bush he's hiding under. Which is enough to give me reassurance I can find him if he goes missing (it has a range of 120m), and that's all we really needed.