At 2:06pm on Sunday I posted my feature request for the Lothian Transport app.

At 3:14pm the following afternoon I received an email saying

Sorry, street names and localities should have been added to the search screen before now. I’ve sent an update to the Google Play store just now so you should have an update available in the next few hours.

and about 45 minutes later my phone automatically updated to the latest version and I could see this: 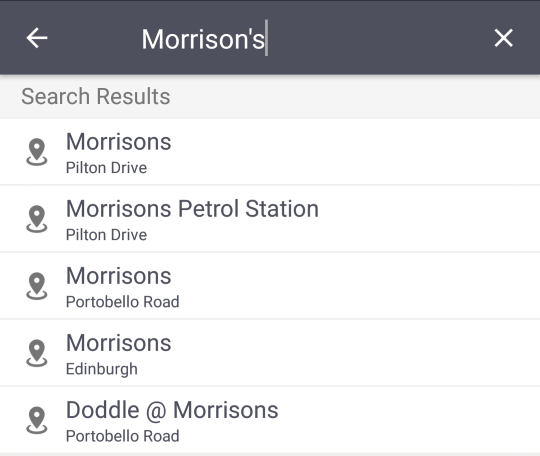 I emailed back saying that this was awesome, but wondering why one of them just said "Edinburgh", and got this in response:

Unfortunately sometimes we can’t control what we get back from Google’s Places API. If Google decides that a place doesn’t need to have more than the town/city listed, then that’s all we get I’m afraid. We also mix in Foursquare and Google Geocoding data where appropriate as well.

It helps to include a bit more in your search, such as ‘Morrisons Granton’ or ‘Morrisons Ferry Road' rather than just ‘Morrisons’. The more you type in, the more accurate the results. It also takes into account your current location – typing in ‘Morrisons’ while you’re near Hyvots Bank will give you results geared towards South/West Edinburgh rather than North/East Edinburgh.

As to your other point (distance to search result) - at the moment, showing distance isn’t possible. We use Google Places to match search queries: that service is great because you can type in anything - ‘Morrisons’, ‘Tesco’, ‘pizza in Leith’ etc. and it comes back with accurate results. However, it doesn’t give the app the location of each place. Instead it gives the app a ‘Place ID’ - once you’ve tapped on a search result, the app sends the Place ID to Google which sends back the exact coordinate of the search result. If that changes in the future, we’ll be sure to include distance as part of the search result.

Which was a fascinating look at how their systems work in the background.

If only more places were so responsive to users taking an interest.