On Thursday, after I voted, I said on Facebook:

I've voted in this week's election.
I assume we get a referendum next week.
And another election the Tuesday after.

I thought I was being ridiculous. It turns out the world is more ridiculous than I.

Labour are currently showing as 5% ahead of the Conservatives in a poll taken after the election, with Theresa May seen as a liability (48% want her to stand down, vs 38% wanting her to stay). Making deals with the DUP is not going to make them look any better, and frankly I'm not seeing how they get to look any less shambolic in the near future. Hell, you wait until Brexit negotiations kick off, and she has to start making people unhappy with some actual decisions. That's if she survives a meeting with her backbenchers today.

And, of course, all of the people who could replace her are...staggeringly unpopular: 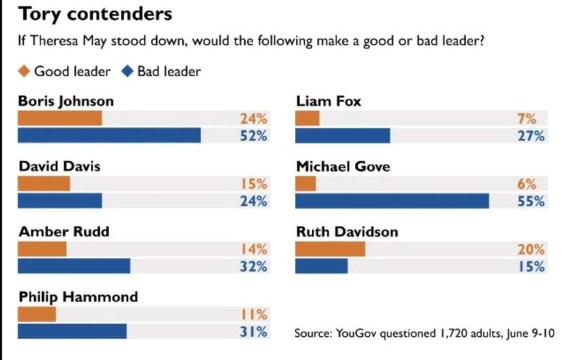 The only person there with a positive outcome is Ruth Davidson. Who is largely unknown (second lowest overall numbers) and crucially - not an MP, so can't be the UK Conservative Leader*. And even if she was, presumably couldn't be Prime Minister**.

So, the question is - what can you do to make a difference?

My suggestion would be that if you're in an area with a Conservative MP you write to them and protest about the DUP. Tell them that you won't put up with any movement on women's rights, or LGBT rights. The Conservatives are worried about this, and it's something that can be pushed on hard. Here's an example of one Conservative MP who's received hundreds of letters, and is making it clear she's not going to go full-DUP.

Keep talking to anyone you know who voted Conservative. Let _them_ know that you think that what May is doing is forming a coalition of chaos. There were a lot of very close elections, and every inch the needle is moved between now and the next election helps.


*Anyone who knows the Conservative Constitution care to make a guess at how easy it would be for them to change that?
**It wouldn't surprise me to know that it was theoretically legal for a non-MP to be Prime Minister, what with our constitutional vagueness. But I don't think that any party would even attempt to pull that off. Hasn't happened since 1902, when it was a Lord.

Theresa May ought to be alarmed - the DUP is flexing its muscles
(tags: NorthernIreland Conservatives politics uk )
Everyone suddenly an expert on Northern Ireland
(tags: NorthernIreland politics satire )
The ingredients section on this toothpaste tube explains where each ingredient comes from and what it does
(tags: teeth design viaElfy )
Bandwidth, wastage, and shared resources
(tags: internet bandwidth Technology )
Some advice for Jeremy Corbyn: Never interfere with an enemy that’s in the process of destroying itself.
(tags: Conservatives epicfail europe politics uk )
Unelectable Man (Nearly) Elected
(tags: politics labour uk )
Why did IBM's OS/2 project lose to Microsoft?
(tags: ibm microsoft history Technology computers )
The Sith Lords to support minority Tory Government on a confidence and supply basis
(tags: StarWars politics uk satire funny Conservatives )
Your reminder that both Labour and Conservatives are dedicated to Brexit.
(tags: UK Europe Labour Conservatives )