1) It's not as simple as just overriding a referendum. Sure, the government can just choose to ignore the result, but the referendum was called because voters were abandoning other parties and moving to UKIP. And the people who voted Leave had a significant proportion of people who felt totally disenfranchised by the existing system, and like their vote didn't count. I remember the paranoia of the Leave voters who were convinced that no matter how the votes went They wouldn't let a Leave victory happen. Is the answer really to prove the paranoid right? Because what that gets you is riots, and a massive swing to UKIP (and worse). When we already have a majority government on only 35% of the vote, pissing off 52% of the population sounds...unwise. 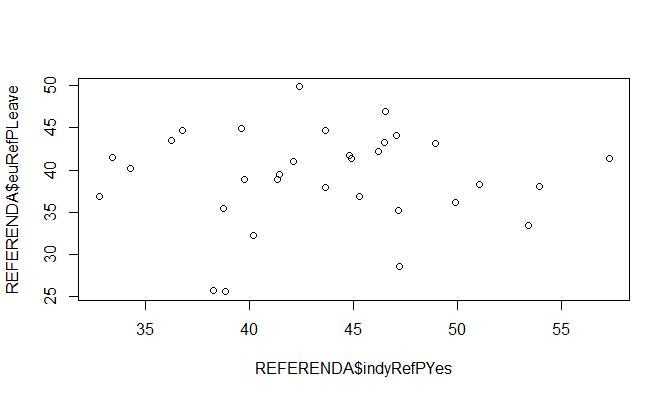 Which shows that the relationship is...nothing at all. Kinda fascinating in its own right. Which would mean that there will be an awful lot of people in IndyRef 2 who voted to stay in the UK but also in Europe, and would explain why the polls showed a 2:1 ratio in favour of Independence a few days ago.

(With gratitude to Kate Cross her crunching the numbers. She points out that some more analysis (maybe weight by population in areas, or get smaller area-level data) and considering the slightly different make-up of the electorate for each referendum would be useful areas for further study.)