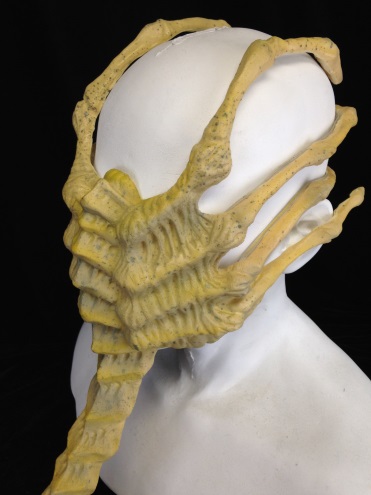 But I went round to my friends Hugh and Becca's to playtest Hugh's new virtual reality game, "Left-Hand Path", which uses the Vive's controllers as a hand (for picking up grimoires, scrolls, spellcasting, etc) and a staff (for pointing near zombies so that when the fireball comes out the end it gives them a bit of a scare).

Before I got to play it though, I got to test out the system and see what the Vive can do. I've played with an early dev kit for the Oculus Rift before, and that was fun, and a different experience to anything I've played before. But it was clearly quite clunky, with large pixels, and quite limited in the movement it could track. The Vive was the first production VR experience I've had, and it was clearly on a completely different level.

The Vive allowed me to move around Hugh's living room, popping up a grid overlay whenever I got too close to a wall, sofa, or TV. The two controllers appeared in the simulation, so I could find them even with the headset on. And although reading text was still a bit tricky when I was moving my head, the level of detail was much better than before, and the head-tracking was perfect.

So I tried out a few games - shooting robots in Space Pirate Trainer, petting a robot dog in The Lab, and getting to paint 3D sculptures in Tilt Brush (watch this video. Seriously.). And basically spent half an hour giggling an awful lot.

And then I plunged into Left-Hand Path. And spent the next hour basically terrifying myself. The first time that I hear a groaning noise from ahead, I end up frantically trying to wave the left controller in exactly the right pattern to trigger a fireball, getting more and more frantic, and casting faster and faster until it goes off, killing the zombie when it's only about a foot from me. The main problem being that it's scary enough that I've almost backed out of the "safe zone" and I suddenly realise that the game is frantically telling me that I'm about to trip over the sofa.

So I proceed more carefully, sneaking round corners, finding grimoires, and casting fireballs around corners repeatedly, just in case. It's an early alpha build, so I'm finding a few issues, but the phrase "It's fixed in the next build!" is used for most of them - and even with the odd glitch it's addictive. At one point I'm crawling along a tunnel on my hands and knees before coming out into a room with a giant pentegram with light streaming light upwards from the centre of it. It's all a bit overwhelming, to be honest. But a lot of fun.

Sadly, shortly after that I have to head home. I'm not quite convinced enough of the longevity to spend the cash on a system this week. But I had an awful lot of fun. And mostly what I really want to do is invite people around, hand them a virtual paintbrush, and see what they make.