National borders exist to pen poor people into reservations of poverty
(tags: globalization inequality immigration economics )
Corbyn reveals the real reason he's been so 'silent' on Brexit
(tags: europe media labour politics )
Stop Explaining Yourself. (Or: It is ok to not do things because you don't want to)
(tags: advice life friendship )
12 Scenes That Prove Han Solo Could Use The Force
(tags: StarWars )
Students Should Sleep in and Start School One Hour Later
(tags: sleep teenagers school )
12 A-List Writers Dish About Lesbian Weddings, Race and Why "Black People Don't Get to Write for White People"
(tags: writing tv )
The rabbis of Conservative Judaism pass a resolution supporting transgender rights
(tags: lgbt judaism )

Last weekend Dani, Erin, and I went to Ikea and Sofology. Where I completely failed to buy a sofa, so far. But did come home with a new desk.

Today Erin and I put together the new desk. And it looks great: 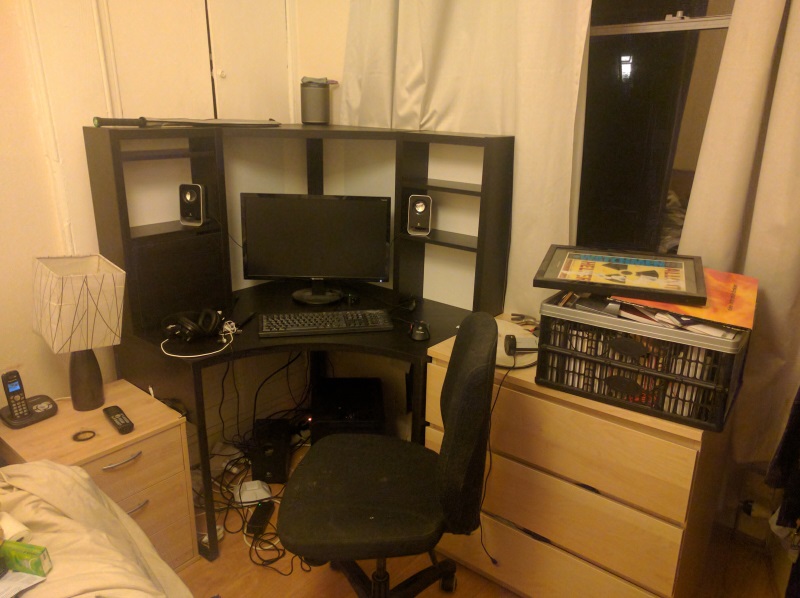 I managed to break only one thing doing this. Sadly, it was the WiFi network connector, which I managed to snap with my elbow. Which was a particular pain as I did so while trying to hurry and get everything back together for a DOTA 2 practice game I was supposed to be meeting up for. Becca leaped into a car and drove over here with a replacement - which then refused to do anything faster than about 30kb/s. Which wasn't enough to download a small patch, let-alone play the game, and after an hour of trying to work out what was up with it I gave up and retired to the TV.

And then came to bed just now and discovered it downloading things at full speed. It'd be hilarious if it didn't cement how incredibly annoying technology is!

Anyway - huzzah for the new desk (and good friends to shop/construct with). The old one was basically a pair of trestles and a rectangular board on top of them, so this is much nicer in every way.