Got to bed early on Friday, and actually managed to sleep for about ten hours, which was nice, and contributed a fair bit towards feeling human. And then the following day Erin had a bunch of processional drummers over, keepiing her company, which was lovely. I'd said to Erin that one advantage of having her as a flatmate was that there would be more socialness in the flat - which she strenuously denied, but it was delightful to have some people over.

They left around 4pm, to go prepare for the performance, and I actually ended up collapsing into bed for two hours - which never happens. In the end I left the flat at 7:40, and got to the bottom of the hill at 8:00, thinking this was plenty of time to get myself up to the acropolis for 8:30, when Bower were singing. Sadly, the queue took about 45 minutes, which meant that I missed Bower's performance entirely. I suspect that the bag-checking was more careful earlier on in the evening.

Certainly they'd have had problems getting everyone on to the hill at the speed they were sending us up, as the place was sold out, with 9,700 people up there in total.

As it was, I got a chance to see lots of areas undergoing final pre, wandering bands of costumed groups, etc. 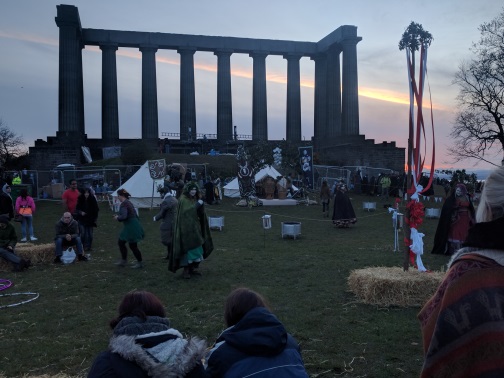 And then went and met up with Simon and Steph, and ended up with a great view of the drummers and whites coming over the acropolis. This kind of thing, only from the other side: 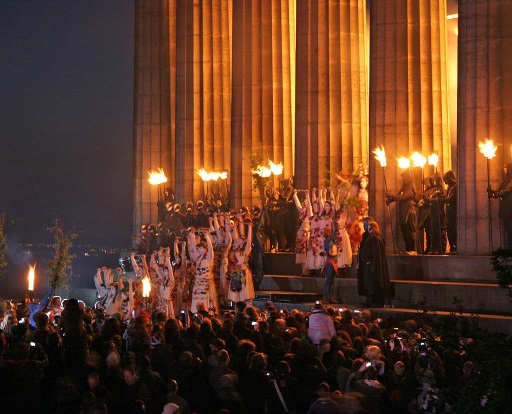 We then leapfrogged around the procession, seeing one spot before jumping two forward to get ahead of it each time. Which gave us Fire Arch, Water Point, Fire Point, and then the stage, for the Green Man's death/rebirth, following this route:

and the timetable here, albeit everything 30 minutes later than that.

Fire Point had some nice fire juggling stuff going on to start with, which I snagged about ten seconds of:


And two wizards standing nearby demonstrating that their sufficiently advanced technology was indistinguishable from magic: 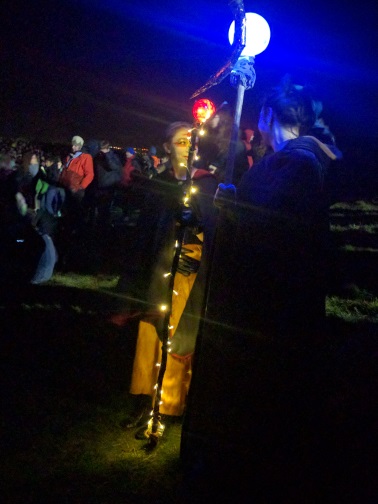 And the drumming at the end, when everything was finished was fun too:


(Warning, there is some very fuzzy nudity in there.)

I then went to the after-party, and danced until 5am (which was awesome, and not something my energy levels are usually up to at all). I have a video of the Processional Drummers there, but I'm waiting for clearance to post that.

And then ended up wandering up Arthur's Seat with a bunch of the remaining people, which was also nice, although it got a bit cold, and I ended up going back down again at about 7am, and climbing into bed at 8am, and sleeping until 1pm, getting just enough sleep to be functional, and not enough to stop me sleeping well tonight, which is what I intend to be doing in the near future.