Sadly, the trailer makes it _really_ hard to judge on its own merits, because it so clearly wants to trade on the original that it comes across as a badly done remake.

Sure, the original had slime. But while it had Venkman disgusted by having to deal with it, and sighing as he collected ectoplasm, or dejectedly trudging along with goo all over him, this trailer has very bad CGI spraying goo directly at a character for several seconds, and then them emphasising this by talking about it getting "in every crack". The feeling I got here was that goo was funny in the original, so making it more explicit would make it funnier. And it really doesn't.

And why the lumpen recreation of the parts of the original team structure that could really have done with being updated? Why have the three white scientists, and then the black person who needs to be slotted in later? Did we _need_ a Winston? And why not have the black woman be one of the three scientists, rather than making her the street-smart one who "really knows New York"?

And then a black-woman reacting to possession in a way that seemed to play directly into stereotypes (The "Oh Hell No, The Devil is alive?" line made me cringe a lot) while also being a tired "homage" to The Exorcist. Seriously, if you wanted to come across as a tired mess of a movie that didn't actually know what it wanted to be then this trailer couldn't have done a better job.

And it's not like the CGI actually even looked that good. This was circulating within hours of the trailer appearing: 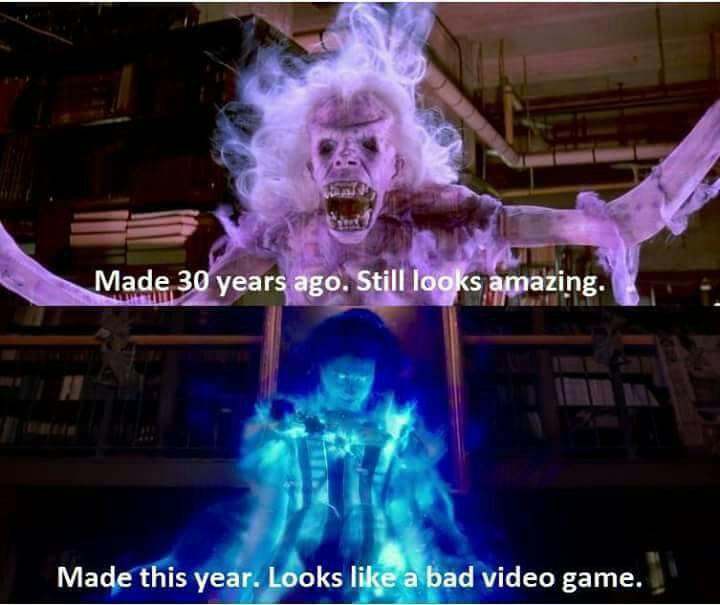 (I feel bad criticising this, because I _loved_ the effect that an all-woman Ghostbusters movie was having on the less pleasant parts of the internet. I was really hoping that the movie would be great fun. But alas, no.)

The Scottish Government is trying to water down the Lobbying Bill. Talk to your MSP now!
(tags: transparency government scotland )
How the Japanese Diet Became the Japanese Diet
(tags: japan diet history )
The "Is This Prime?" game
(tags: math game )
New Order, olden style: A unique take on Blue Monday
(tags: music art video viaSoonLee )
The best suggested use for Samuel L Jackson in quite some time.
(tags: movies funny )
Star Trek, Teleporters, Consciousness, and the Silent Holocaust
I've encountered this kind of discussion many times in the past, but this is a very nicely done take on it.
(tags: consciousness StarTrek death video )
Google's DeepMind defeats legendary Go player Lee Se-dol in historic victory
(tags: games ai Go )
Is it time to stop giving so much of a damn at work?
(tags: work psychology happiness )
Sir George Martin dead: Game of Thrones fans had ‘mini-heart attack’ when they thought George RR Martin had died
(tags: funny GeorgeRRMartin death gameofthrones )