And a more detailed article.

Sometimes I'm actively relieved that all wine tastes overwhelmingly acrid to me. It means I don't have a horse in this race, and can continue to have awfully pedestrian tastes without worrying about pseudo-random snobbery.

We had a pretty hard counselling session yesterday - there's a bunch of stuff we're digging through at the moment about how to act when we have conflicting needs, driven by multiple years of stress, PhD, cancer, etc.

Following that, we went for our usual debrief meal - we traditionally go out for a cheap meal after counselling, leading us to refer to our regular counselling evening as "Steak night". And during this, Julie said "I don't want to go home. I want to dance slowly to loud music somewhere." To which I, tiredly, said "I don't think there's much on on a Monday, but we can put some on at home."

And we did. And then, at about 9:30, Julie came into the bedroom where I was reading, and said "Right, I'm getting dressed, we're leaving in fifteen minutes." And we did.

We got to The Hive at 10:15, which is indeed generally full of scum, villainy, and students who are completely wasted on terrrible cheap vodka. But at that time was completely empty. Which was awesome, because the "alt" dance floor consisted of the two of us and a very bored DJ. Who recognised that we were "olds" and just kept chucking 90s music at us. We got to dance to The Offspring (Self-Esteem), Faith No More (Midlife Crisis), Garbage (When I Grow Up), Linkin Park (One Step Closer), Guns 'N Roses (Welcome to the Jungle), and unexpectedly awesomely Blodhound Gang (Ballad of Chasey Lain). And a bunch more that's now blurred together.

By which point it was around midnight and other people started to fill the place up, so the DJ switched to more poppy tunes. We enjoyed YMCA and Uptown Girl, but when we hit the point where he was playing Steps (Reach for the Sky), Whigfield (Saturday Night), and Rednex (Cotton Eye Joe) we decided that "running away" was the better part of "not listening to this shit" - this was around 1am, and having been dancing for nearly three hours straight I was dead on my feet. And the nice thing about it being a week night was that there were lots of taxis about, rather than a 40-minute queue for them.

Today, Julie was....not entirely well. She woke me up at 8am demanding dioralyte rehydration sachets, and then I couldn't get back to sleep, so I got up and surfed the internet until 10:00 when she woke up again and demanded soup (which she ate in the dark), and then I left her to go back to sleep again, where she stayed while I went out and met Lizzie for lunch, which was lovely despite us spending a lot of time chatting about our relative stresses.

Here's what Julie looked like _before_ the six vodkas: 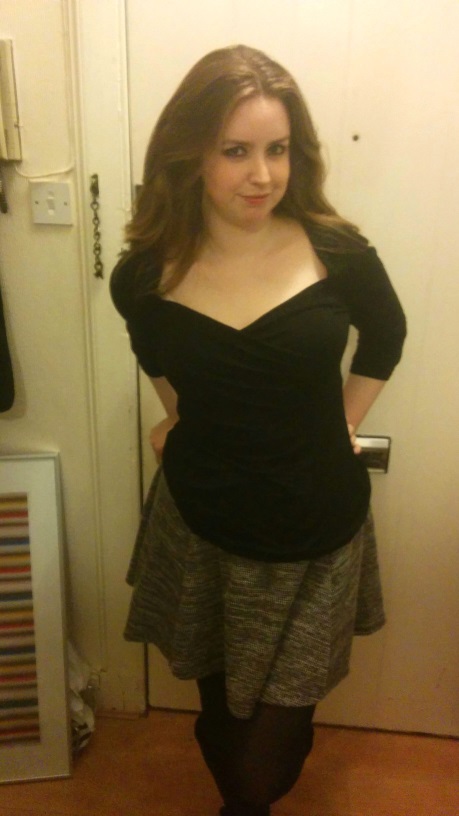 There will be no photo of the after-effects.

My TV has a remote control. It has to be pointed directly at the TV to work. Which is fair enough, because the TV needs to be in a prominent position where it can be easily seen anyway.

My various other devices, like the amp, the Playstation, the cable box, etc. also have remote controls. None of them need to be visible, because they don't have an actual interface I need to look at. But the amp and the cable box both have to be put somewhere visible anyway, because their remote controls are infra-red 80s tech, and so they need to be pointed directly at the receiver to work.

The PlayStation remote, at least, works over Bluetooth, pretending to be a PlayStation controller, so it can work even if there's something directly in front of the device itself. But even this is proprietary.

And this made me think - nowadays all of my major devices are attached to my network, either over WiFi or plugged in directly. Why, then, don't they have a nice simple standard interface for setting values and getting statuses from an app? Something simple and text based would allow any device to return a list of values with things like "current channel", "available channels", "volume", "brightness", etc. and also allow them to be set. Any app could then work with this to act as a remote control - and you could even script events to make devices work together. "Turn on the TV, Turn on the Amp, Change the Amp to the DVD channel, turn on the DVD player, Start DVD playing" should be a trivial thing to tell your devices to do nowadays. But clearly nobody cares enough to make it happen.