We started by going to Butternut Squash for breakfast, where I had a delicious fried breakfast. They're a 10-minute bus ride away from town, but on the other hand they're right on the beach, and so we went for a walk afterwards and got some photos across to Fife, here hidden in the mist: 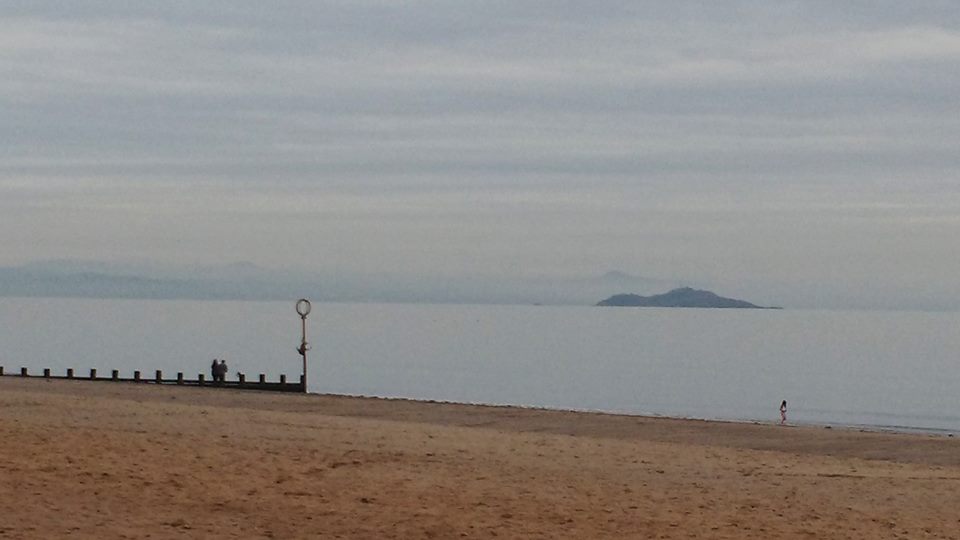 and also down towards where the towers were blown up a couple of weeks ago. Here they aren't:

The light had a fantastic silvery quality which the camera is almost entirely failing to pick up. You'll have to take my word for it that it was even more beautiful.

We then wandered up to St Margaret's House, where the art gallery had two exhibitions on. It's an ex-government building that's now full of artists, crafters, and other community organisations. From the outside, the building is very dull, but the inside is rather nice, with bits of art decorating it, and the three gallery spaces all had interesting pieces. Well worth seeing, and nicely different to what's up in the major art galleries in the city.

We then got the bus home, and Julie napped for an hour and a half to recover, before we popped along to the RAF club, where a few friends were involved in an event. Where we bought a few slices of cake, before collapsing again in Joseph Pierce bar so Julie could get off her feet. Then a bus home, and now Julie is relaxing on the sofa until she feels recovered. Shortly I will force myself into a vertical position and go find something for dinner in the local supermarket. Today we've both been exhausted, but not letting that get in the way. Hopefully tomorrow we'll both have some energy.