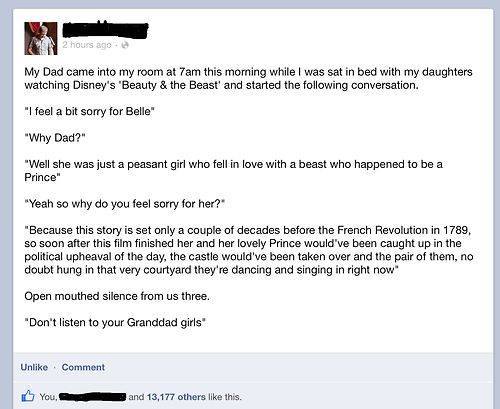 Which led to the following (somewhat edited) conversation:

Rachel: How sad is it that the only way I'm able to deal with this is to think, "Yeah but life expectencies were way shorter back then so if you figure the Beast is probably at least mid-20s and Belle is probably 18 or so (to avoid an ick factor, not because of the average marriage age) then in 2 decades they're both nearly or in their 40s so they've lived a long full life anyways and besides Belle probably died in childbirth.
And that's making me feel BETTER.

Mark: But what Andy's stats don't show is that 90% of fictional aristocrats were smuggled out of France by Sir Percy Blakeney . So they probably lived to a ripe old age in a minor country house in the borders or the north of England.

Ian: This all cries out for a sequel. With a Pimpernel/Beauty/Beast love triangle, a pale and villainous Robespierre played by Jeremy Irons, and a singing, dancing magical guillotine.

Michael: Unless they were smuggled out in the Marie Celeste, which would have been a bummer, frankly.

Nancy: The Beast and Belle are smart people. Maybe they'd see the Revolution coming and get out of France.

Gwen: I definitely think that makes sense for their characters. I can see Belle being very politically savvy, and Beast being completely in sympathy with the people (but realistic about their likely hatred for him) once Belle had gotten to him.

Dan: Their son probably became one of Napoleon's marshals.

Summary: My friends are the best.