With the polls showing that Scottish Labour voters are abandoning ship for the SNP in droves, the next election is looking...interesting.

ElectionForecast are showing the results as follows:
Now, you need 326 seats for a majority. Which means that neither Conservatives nor Labour win by themselves.

It also means that neither can win through a coalition with the Lib-Dems.

It basically means that if either of the big two want to be in power they need support from both the Lib-Dems _and_ the SNP.

(Alternatively, they could go into power with each other.)

Oh, and two hours ago the new SNP leader announced that she wouldn't support a Conservative government.

Now, the question is - what would the SNP want from supporting a Labour government? Pretty much the only answer there is Devo Max. By which I mean "Everything other than defence and international relations goes to Scotland, with it paying Westminster for use of those services."

And what's the Liberal-Democrat response likely to be in that situation? "In that case we need constitutional reform and devolution across the UK." Oh, and considering we're now in a state where we clearly have _at least_ five parties with major influence over how voting turns out, if not more, we need STV for at least local elections (as Scotland has for local elections and NI has for their Assembly).

Of course, it might not turn out that way at all. Labour could do something very impressive in Scotland to not lose lots of their seats to the SNP. They could even pull ahead nationally if they started offering an actual alternative to the Conservatives. But it seems very unlikely to me that we're going to end up in a situation where any one party has a majority, and fairly unlikely that it's going to need less than three.

Oh, and all of this plays into the question of who should be in the Leadership Debates between now and the election. There's a great write-up here going through the options sensibly.

Anyone want to chime in with alternate suggestions for how it might go?

Notes:
1) I've left the NI parties out of this, on the grounds that they tend to not support Westminster parties in the same way. If anyone wants to chime in with how they might affect things then I'd love to hear it.
2) Parts of this came out of discussions with

danieldwilliam last week, for which I am grateful.

That's now four of my friends who have watched it and then come back to the social media to talk about what an offensive pile of arse it was.

Not offensive in a sexist/racist way. Just that it led them down the alley of "Hard sci-fi, science that makes sense, and plots that hold together", before thrusting them up against the wall of "Utter bollocks" and stabbing them in the back with the knife of "We don't have to make sense, we have special effects and loud music instead."

Which is a shame, really. Not that I mind films that are utter nonsense and make as much sense as the ramblings of an eight-year-old. I quite enjoyed Guardians of the Galaxy, and the "science" in that made as much sense as you'd expect.

Which, I think, is the point. I don't expect plots that make huge amounts of sense in my superhero movies. Or in Doctor Who (although that can stretch too far at times). But when a movie goes about looking all realistic, that raises expectations. In this case, apparently, just to dash them to the ground and then stomp on them.

Baffling how Interstellar adheres to some science & ignores rest. Like reproducing African savanna in detail BUT antelopes r made of yogurt

Oh, and also apparently Christopher Nolan still cares very little about people hearing the dialogue. To the point where this was posted up in a cinema in the USA that was fed up with the complaints: 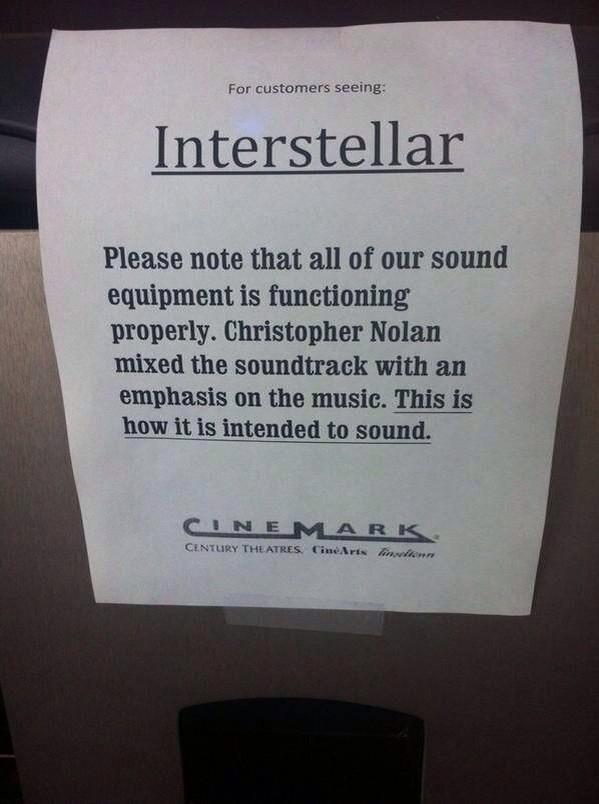 So to sum up: I find it very hard to turn my critical part of my brain off when the rest of the movie has asked me to turn it on. I would therefore not be likely to enjoy the movie. I wish that I could. I hope the rest of you enjoy it.