Yesterday we went to see the Game of Thrones Exhibition in Belfast.

The tickets were bought about a month ago - they all sold out almost instantly, so we were hammering the refresh key when they went live on the website, and were very happy to get two of them.

The tickets are booked for a specific hour-long slot, so we rolled up fifteen minutes before ours started, to find a load of people sitting around outside the Waterfront Hall. Julie wandered up to the guard on the door to ask when we should start queuing, and managed to get us in right at the front of the queue! And then, once we were in, she pointed out that we should head straight to the Iron Throne to get photos, as the previous hour's queue would have cleared, and the new lot wouldn't have got there yet. Which was very smart.

There were loads of costumes, videos of behind-the-scenes explanations, weaponry, and occasional dragon models. Plus a dog-head or two.

We took a load of photos, and then cut them down to the 25 best ones - and you can see them here. Click through to see them full-size, as some of them are massive. 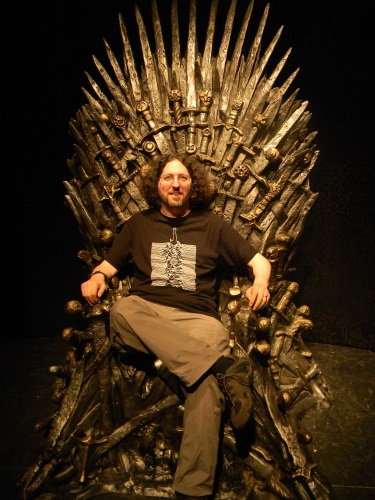 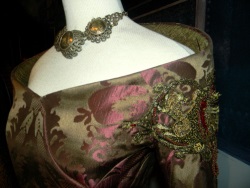 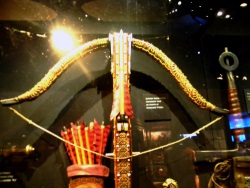 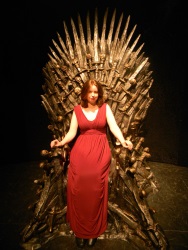 The detailing on the costumes was fantastic, you can see the lion stitched onto Cersei's costume there above. There's a great overview here and the designer's site is here - both are well worth a look!

(Sadly, the crowns, jewellery, flayed map, and weapons were behind glass, so the photos aren't as in-focus as we'd like).

The exhibition is in Belfast until Sunday - and although it's sold out they were letting people in on the door when there were quiet spots yesterday. And then it's in Vancouver in August, so if you're over there, I recommend it!