I knew that Monument Valley was going to be special as soon as I saw the introduction screen. It had a perfection combination of art and sound that let you know that the people behind it were absolutely passionate about what they were making.

It feels rather like Journey to me. It's not the same masterpiece that Journey is, and that's largely because it's a little more "gamey" than Journey. Journey has things for the player to do, but they're more about exploration than actual puzzle solving - the difficulty level is right down at "never held a controller before". Monument Valley requires a little more from its players - although I only got stuck once, and that was because I hadn't spotted something really obvious.

But the atmosphere, the combination of the sparse information, the neat combinations of architecture and movement, and the sense of wonder are all there in spades. Nominally you're solving three-dimensional puzzles by rotating things, pulling things, and moving around the new surfaces you've brought into being. In actuality you're moving through the design the creators have laid out for you, eager to see what the next delight will be.

It's not a cheap game - it's £2.49 on Android, and it took me about two hours to work my way through, with occcasional short breaks. But if you're anything like me then you'll gladly pay that, and consider it cheap for this much wonder. 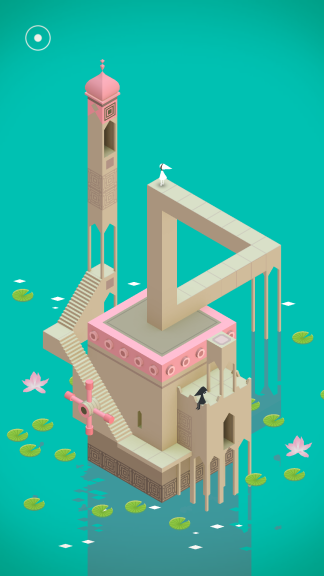 (Available on Android and iPhone, in case you were wondering.)