Bit.ly handily makes it possible to sort my saved links by number of clicks*, slow and buggy though this functionality is.

10) The discussion, on Wikipedia, about Philip Roth asking for a correction to the article on The Human Stain.. It's the section "The book's author requests this article be corrected", and is worth reading for insight into how Wikipedia works. (2,131 hits, September 8th)

4) Something that Google put up on April 1st, and no longer exists. I think it was Google's "Really Advanced" search, which you can read more about here, along with all of the other April Fools that Google had this year. (9,596 hits, April 1st)

A brief glance at which will tell you that I got clicked on more in the second half of the year than the first, which I entirely blame on retweets by

glinner, whose retweets are almost entirely responsible for all of those hits.

*These clicks are _only_ for Twitter - I only shorten links on Twitter because you used to have to, and my attempts to turn that functionality off ended up breaking things.

I blame myself, of course. Here are my visitor counts from 2011 and 2012, taken from the statistics page 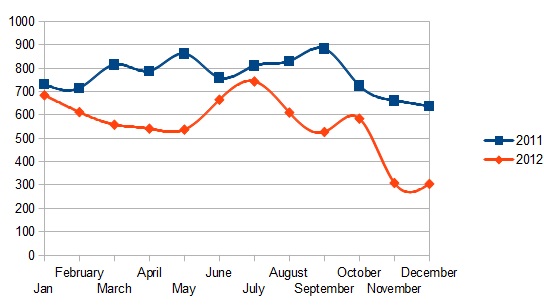 You'll note that I'm not offering any solutions here. I do remember a time when more people were posting about what they were reading, playing, watching, and generally doing, but I assume that the pall wore off for most people, or they moved to somewhere where people had real names, and they could talk to their family about it without being embarassed at having a username of "EvilCow666"*. Either that, or you're all sharing pictures of cats over on Tumblr.

*Which is in use at various points on the internet, but not on LJ, so I feel relatively safe using it as an example. Original post on Dreamwidth - there are