Andy: There's a headline on the BBC "Lesbians given equal birth rights".
Julie: What, were they not allowed onto the maternity wards in case they got too aroused?!

Ed was asking on Facebook what it would be like if we didn't age visibly so much - after all, other animals don't tend to.

Is this actually true?  Thinking about it, most other animals don't seem to get wrinkled in the same way, nor does their fur turn completely white or all fall out.  But is this just some animals?  Do other animals age visibly the same way we do?  Or is there something odd about people?

Open to: All, detailed results viewable to: All. Participants: 45

Lord Of All Vapourware

I just came back from a planet where the dominant lifeform had no  bilateral symmetry, and all I got was this stupid F-Shirt.

Nick sent me a link to an MS Paint challenge on Something Awful here - you're given a stick man on one side of a cliff, and you have to "draw him across".

And some of them are pretty funny, and quite well done.

And then, here on page 18, there's a fucking masterpiece, where you can literally watch someone improve over the course of a few panels.

The internet - full of stuff you don't expect.

A friend (who can out himself if he feels like it) sent me a link to a company that makes bollards that look like children, in order to help with road safety around schools.

This is all well, and good, except when you put a few of them together... 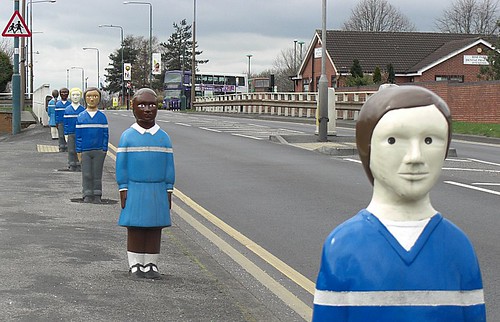